PA(P)P, the Swedish network for small scale publishers, presents a new website that works a joint catalogue for 25 publishers within the cultural sector.

For most of our publishers, making books is a part-time labour of love, but publishing only a few titles per year makes maintaining an audience difficult. By presenting a joint catalogue we are offering our audiences access to a continuous flow of new exciting books — in many cases from publishers unknown to many.

This website, www.papp.to, will be released in co-junction with the 2015 Göteborg Book Fair and presents over 100 books by 25 Swedish publishers — and we are certain that more are to come soon.

PA(P)P will continue to function as a network for exchange of knowledge between our publishers, and we will keep on organizing lectures, exhibitions and joint presence at book fairs in Sweden and abroad, but from now on this website will be the main hub in our organization.

You can read more about PA(P)P, see what the network is and has been up to on the events page — but most important: Browse through all the books and look at hi-res images, loads of colophon goodies and click the links on how to purchase these unique labours of love. And don’t hesitate to get in touch if you have questions, suggestions or run a Swedish publisher who wants to join the network! 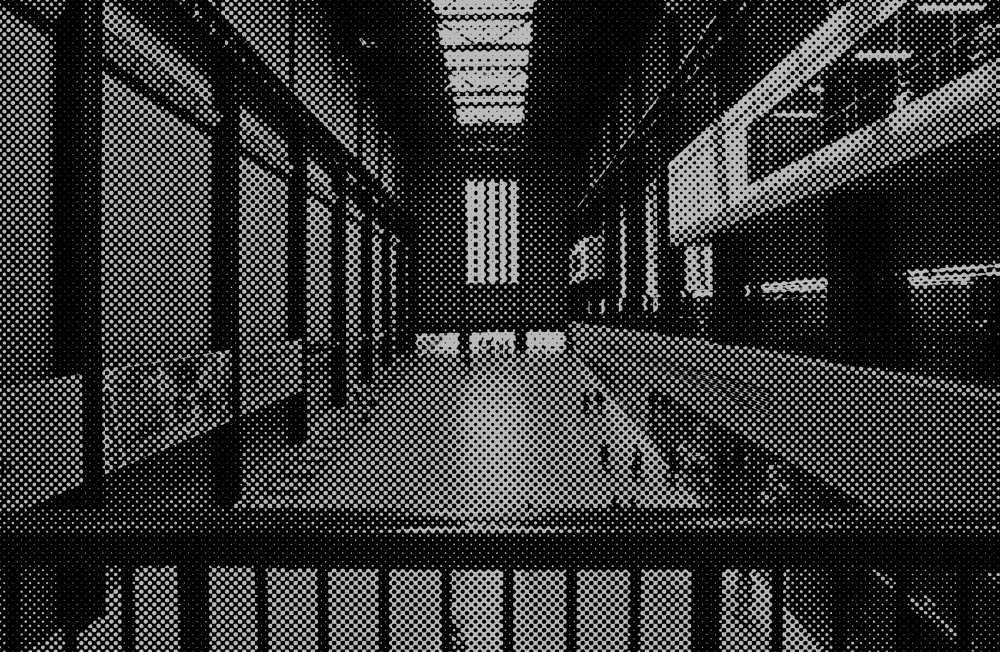 This weekend, May 22–25, at Tate Modern, 7 of the 27 PA(P)P publishers will be present at the art publishing fair Offprint. If interested in Swedish small-scale publishing, do not miss this opportunity to come by, say hi, look and buy tons of amazing books!

Participating publishers from the PA(P)P network are:

Publishing as (part-time) Practice
PA(P)P is a network of small-scale Swedish publishers within the cultural sector. Through collective marketing, distribution and the exchange of knowledge, we aim to create an interesting and diverse list with favorable conditions for our publishers.

Currently we are participating in book fairs and exhibitions and are working on an online platform with a shared catalogue and forum to be released in the summer of 2015. As of May 2015 PA(P)P consists of representatives from 27 publishers. PA(P)P also hosts www.ArtBookFairs.org, an online calendar with art book fairs across the world.

Dear friends of PA(P)P, PA(P)P is currently in transition. Since our incarnations as a seminar (in collaboration with Iaspis, in May 2012), a travelling exhibition (Oct 12–Nov 13) and a publication (that as of now can be ordered here), we have managed to receive support from both Innovativ Kultur and Kulturbryggan.

Some short but fun news:

The books from the Stockholm and Copenhagen exhibitions will be on display, and a selection of Norwegian small scale publishers are joining in. Matilda Plöjel, Mattias Jakobsson & Peter Ström will be present and give us the story of PA(P)P. Also, Jessica Williams + Espen Friberg (NSEW) and Aslak Gurholt Rønsen (Aki Books) talk about their publishing initiatives. Please join us at Grafill R21, Saturday April 20, 13.30. The exhibition will be on display until the end of April. Organized in collaboration with Grafill grafisk design.
We are happy to show the PA(P)P exhibition at this years’ It’s a Book, it’s a Stage, it’s a Public Place — unfortunately for the last time this year. Come by and have a look at tons of amazing books, both the PA(P)P exhibition and many many others. Centraltheater, Leipzig, Germany, March 16, 2013 Hope to see you there!
Publishing as (part-time) Practice highlight graphic designers who are also publishers, and pursue a discussion of the designer’s changing professional role as both author and publisher. It started as a one-day seminar in Stockholm, May 2012, initiated and organized by designers / small-scale publishers Matilda Plöjel (Sailor Press) and Mattias Jakobsson & Peter Ström (Konst & Teknik / Andperseand) and Iaspis.

At Motto Charlottenborg there will be an exhibition of a fine collection of books from Danish and Swedish small scalepublishers, the Swedish ones previously shown in Sweden and at the New York Art Book Fair 2012.

We are very happy to announce that the PA(P)P exhibition showed at last years’ New York Art Book Fair in September will go on a small tour over the coming months: 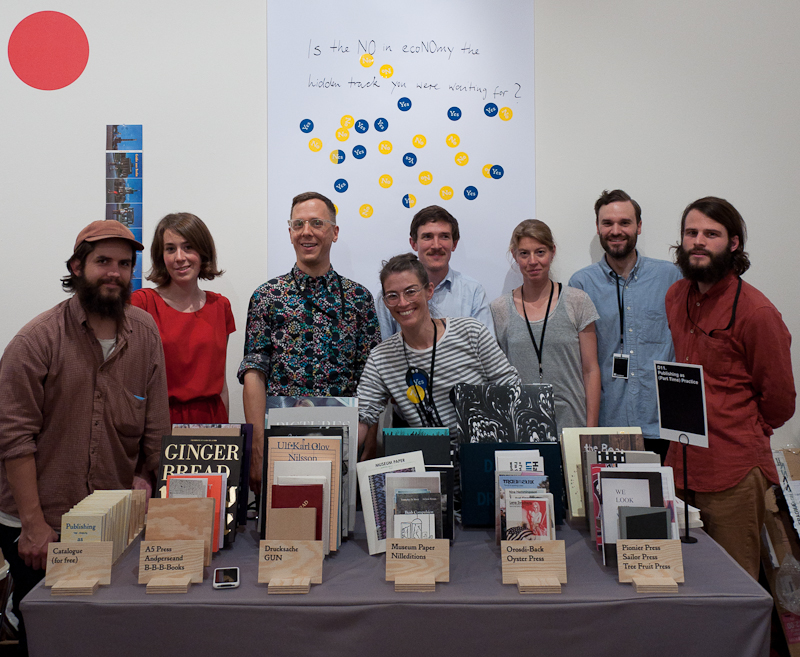 Thanks to everyone who showed up at our Publishing as (part-time) Practice booth at the NY Art Book Fair; we met some wonderful people who (mostly) seemed very enthusiastic about the books we were showing! Images will be uploaded over the coming weeks here. The show now goes on to Signal in Malmö, where PA(P)P will be on show starting October 11 — if around, don’t miss out! Don’t forget to watch this space for future updates on the project.
Come listen to a talk between Matilda Plöjel/Sailor Press and Karen Grønneberg & Marte Meling Enoksen from the bookshop Motto in Copenhagen and join us for the book release of We Look and We See by Lotten Pålsson and Kristina Bengtsson. This very evening we are also proud to present a collection of books from twelve Swedish small scale publishers brought together earlier this year for the seminar on independent publishing Publishing as (part-time) Practice. (Source: signalsignal.org)
In May 2012, Publishing as (part-time) Practice was a one-day seminar in Stockholm (May 25, 2012), organized by designers / small-scale publishers Matilda Plöjel (Sailor Press) and Mattias Jakobsson & Peter Ström (Konst & Teknik / Andperseand) and Iaspis. The keynote speakers, in addition to author and curator Andrew Blauvelt (US) were: Georg Rutishauser from edition fink(CH), Elin Maria Olaussen and Karen Christine Tandberg from Torpedo Press (NO), Matthew Stadler from Publication Studio(US), and Nille Svensson from Nilleditions (SE). The seminar brought together artist-run initiatives in the fields of literature, photography and visual art as well as design, to share experiences of publishing.

The purpose of the seminar in Stockholm and the participation in 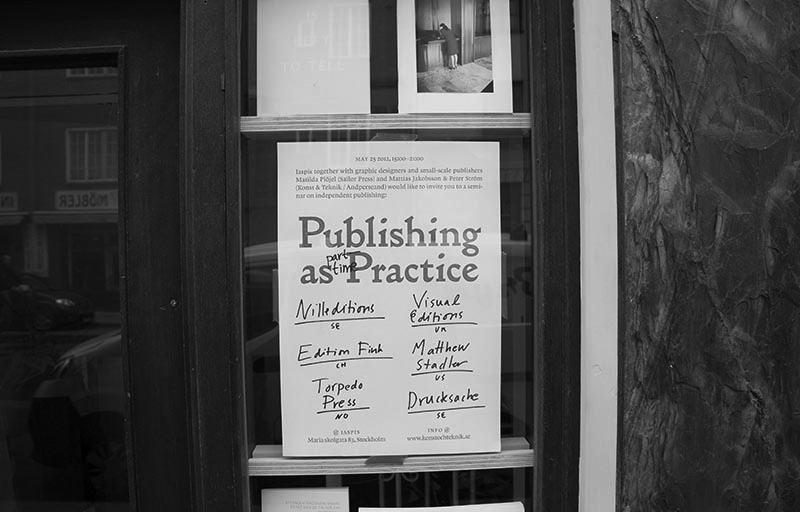 Torpedo is a non-profit (project-based) organization devoted to the promotion and production of artists books, art theory and critical readers in contemporary art. Situated in Trelastgata, Oslo, Torpedo is both a publisher and a bookstore, and occasionally a venue for exhibitions and concerts related to book launches and the process of publishing, or discursive activities like panel discussions and debates. Founded in 2005.

Publication Studio was founded 2009 by Matthew Stadler and Patricia No. Based in Portland, Oregon, the studio also visits other cities to collaborate with like-minded fellow travelers and found sibling studios using the same equipment and approach. Currently there are six Publication Studios. Publication Studio print and bind books on demand, creating original work with artists and writers. They use any means possible to help writers and artists reach a public: physical books; a digital commons (where anyone can read and annotate the books for free); eBooks; and unique social events with. Publication Studio is a laboratory for publication in its fullest sense not just the production of books, but the production of a public.

Matthew Stadler is a writer and formerly the literary editor of Nest Magazine and co-founder of Clear Cut Press. He has written four novels and received several awards and fellowships in recognition of his work. More recently, he has compiled four anthologies about literature, city life and public life. His essays have been published in magazines and museum catalogs around the world, and focus on architecture, urban planning and the problem of sprawl.

Nilleditions is a book publishing project founded by graphic designer Nille Svensson in 2011. Nilleditions ambition is to explore publishing as a means of self expression by trying to avoid conventional limitations on how book projects are initiated, produced, spread and consumed, and to embrace the possibilities and restraints associated with publishing in the post press era. Nilleditions publishes each title in two editions one unlimited edition, where every book is printed in one copy every time it is ordered and one limited edition, more to be seen as an artists book.

Nille Svensson is a Stockholm based graphic designer who co-founded the design agency Sweden Graphics and the publishing house Pocky. Apart from running Nilleditions he also runs Studio Nille Svensson and works as art director at Tidningen Konstnren and developer at Publit. His work have been widely published and awarded.

Andrew Blauvelt is Chief of Communications and Audience Engagement and Curator of Architecture and Design at the Walker Art Center. Previously, he served as Design Director of the Walker for more than a decade, leading the organizations progressive brand identity. A graduate of Cranbrook Academy of Art, he has been a practicing designer for more than twenty years and the recipient of more than 100 design awards. He writes and lectures about design and culture for various publications including Eye, Emigr and Designobserver.com. Before joining the Walker, Blauvelt was a professor of design at several institutions in the U.S. and abroad, developing new undergraduate curricula and graduate study programs. As a curator of architecture and design at the Walker he has organized exhibitions such as Strangely Familiar: Design and Everyday Life (2003), Some Assembly Required: Contemporary Prefabricated Houses (2005), and Graphic Design: Now in Production (2011)

edition fink is an independent publishing house for contemporary art, founded in 1994 and based in Zurich, which concentrates on producing artists’ books and art catalogues. What distinguishes edition fink is its close collaborations with the artists on the design and production of the publications. Recently about 8 publications a year result from these collaborations, each in its own unique shape and design.

Georg Rutishauser is a trained artist and worked for several years under the label Rutishauser/Kuhn as an artist group in the field of art. Beyond this he started to design books. After that he practiced both professions for some years: designing books, and later also publishing them, as well as producing art works, installing exhibitions and making performances. Also he was always involved with collaborative curatorial projects. While Kuhn and Rutishauser finished their collaboration in 2001, Rutishauser decided to focus on book projects and publish them through edition fink.

Druchsache is a publishing house in Stockholm founded in 2010 that mainly focuses on poetry and critique, published as printed material as well as immaterial appendixes such as performances, readings, lectures, film, opera, pdfs etc. Publishers are Jacob Grönbech Jensen, Rikard Heberling and Emi-Simone Zawall. Jacob and Rikard work as graphic designers and Emi-Simone as freelancing editor and translator.

B-B-B-Books was founded in Stockholm in August 2011, and takes an interest in the interaction between the different parts of book production. Every new project aims to encourage the convergation of photography, text and production. B-B-B-Books is run by the photographers Klara Källström and Thobias Fäldt and the graphic designers Axel von Friesen, Petter Törnqvist and Marika Vaccino Andersson.

Andperseand is a micro-publisher founded in 2009 by graphic designers Konst & Teknik (Mattias Jakobsson & Peter Ström), theorist Jeff Kinkle and artistEmanuel Almborg, based in Stockholm and New York. With the aim of exploring the book in both its physical and digital form, Andperseand functions as a platform for the groups collective and individual publishing projects. To this date three books have been published, each release accompanied by lectures and/or exhibitions.

Sailor Press is founded and run by graphic designer Matilda Plöjel and aims to offer an alternative to publishing restricted by the constraints of institutions or larger publishers. In close dialogue and collaboration with the artists we develop publications that explore the artist’s work as well as the book as a medium. Sailor Press also distributes critical writings on design, craft and art.